This Cerny home is in Lake Forest, Illinois.  The brick exterior features an entry influenced by Art Deco and rooftop cupola.  There are many classical influences including the dental detail throughout and arched windows on the coach house addition.

Architect Jerome R. Cerny studied architecture at the School of the Art Institute of Chicago, the Armour Institute, and Yale University.  Early in his career, Cerny worked for notable architects David Adler and Stanley D. Anderson, among others.

He opened his practice in Lake Forest, Illinois in 1929.  Known for designing elegant country homes which reflected traditional design, Cerny was adept at introducing style that would make each home unique.  He pulled from many periods including Art Deco, and classical design.

Another home designed by Cerny, this charming house in the Norman French style built in Raleigh, North Carolina was designed for Truman and Annie Laurie Williams in 1938.

They are both so beautiful, aren’t they?

Kimberly from Turning it Home has posted the results of her recent bathroom update which she completed for only $70.00.   I think she did an amazing job!

“All it took was a quart of free paint, one can of spray paint (actually, less than one can!), some scrap wood and various accessories. Pretty crazy, huh?”

What a transformation.  Visit her blog to see more pictures.  Proof positive that you don’t need to spend big bucks to get big results.  Way to go Kimberly!

I hope you are having a great week!

Here is lovely 1911 Craftsman style home on Sheridan Road in Evanston, Illinois.   On the exterior, the low sloping roof, gabled dormers, deep overhanging eves, and the front porch beneath the extension of the main roof define the style.

Can you see the architectural detail added around the front door?

The design allows the outdoors and the indoors to flow easily from one to the other.

There are wonderful details on the fireplace mantel and around this door leading outdoors.

The ironwork detail on the stair rail reminds us that Craftsman style architecture followed the Victorian period.  Craftsman style celebrated the skill of local workmen, but the curving detail evokes a Victorian feel.

What a beautiful home!

And here’s a contemporary company, Stellar Works, whose products also call to mind the skill of the individual craftsman.  Isn’t this cabinet fun!

Have a great week!

I love the soothing color palette and mix of periods, but you really have to check out the Master Bath.  What a view!  Let me know what you think!

Houzz Tour: A Classic Ranch House Rises to the Location

The main stair is especially striking as it splits mid-way up and wraps around.  There are columns inside and out which are a mainstay of this style.

Jennings was the architect for the Milwaukee Road (railroad) from 1885-1893.

Later he became the part-time supervising architect for the University of Wisconsin-Madison from 1899 through 1906 where he oversaw the design of several buildings on campus.

The Delafield Fish Hatchery in Delafield, Wisconsin was also designed by Jennings. 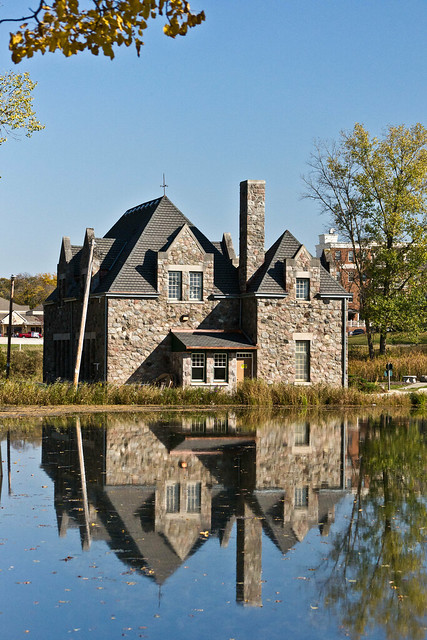 It is now used by the park district.  Isn’t it beautiful?